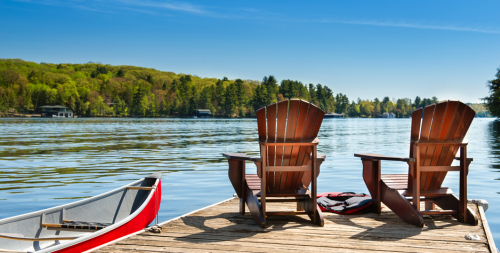 TORONTO, ON, March 23, 2021 – According to Royal LePage, the aggregate price of a house in Canada’s recreational regions is forecast to increase 15 per cent in 2021 to $502,730, as demand continues to rapidly outpace inventory. The company revised its 2021 recreational property forecast, released in November 2020, upward to reflect the increasing unmet demand from potential buyers who are actively looking for properties.

“From coast to coast, the line between primary residence and recreational property is blurring,” said Phil Soper, president and CEO, Royal LePage. “The trend began last summer when the option of traveling abroad was taken away, and continued to gain popularity as it became clear that with access to high speed internet, many people can do their jobs from just about anywhere.”

Houses in the recreational regions of Ontario and Atlantic Canada are forecast to see the highest price appreciation in the country this year, set to increase 17 per cent, while prices in Quebec and British Columbia are forecast to increase 15 per cent and 13 per cent, respectively. According to a survey[1] of 190 Royal LePage recreational real estate professionals across the country, 91 per cent said that their market has less inventory than typical for their respective regions, including 72 per cent that reported significantly less inventory available.

In many areas, supply shortages are forcing buyers into multiple-offer situations, which often result in properties selling above the asking price. In Ontario, 87 per cent of recreational real estate professionals said that more than half of properties available on the market are selling above the asking price. In Quebec and British Columbia, 65 and 52 per cent respectively reported the same.

“The low inventory, high demand scenario that is defining Canada’s current real estate landscape can be frustrating for buyers and their agents,” continued Soper. “Without enough supply to meet demand, prices continue to increase at above normal rates. And with so few listings to choose from, owners are concerned they will have nowhere to go if they sell before buying, so they hesitate to list. This cycle makes it difficult for anyone to move ahead.

“Life during the pandemic has made cottage country and country living more desirable than ever, in every part of Canada. The flexibility provided by working remotely, excess savings from months sitting at home, and low interest rates have left Canadians young and old alike to seek properties with more space, easy access to nature, and the ability to achieve that ever-elusive work-life balance. And, an increasing number of new owners intend to use these escapes for both weekend play and Monday to Friday work.”

Royal LePage real estate professionals in Western and Atlantic Canada have reported an increase in out-of-province buyers over the past year. All experts in the recreational regions of the Maritimes and more than two-thirds (68%) of those in British Columbia reported seeing a boost in inter-provincial migration this year.

The younger generation is a very active segment of buyers. A recent Royal LePage survey released last month[2] on real estate trends among Canadians aged 25 to 35 found that when given the choice, 47 per cent said they would choose small town or country living, while 45 per cent said they’d prefer to live in a city. Nearly two-thirds of Canadians in this age group (63%), who are employed or seeking employment, say the ability to work for an employer that allows the option of remote work is important. Fifty-two per cent said the availability of remote work has increased their likelihood to move further from their current or future place of work. Overall, 39 per cent of this cohort are considering a move from their current home to a less dense area as a result of the pandemic, while 46 per cent said the pandemic had no impact on their desire to move to a less dense area.

“According to our research, access to high speed internet and the ability to work remotely are among the top criteria for those seeking properties in Canada’s recreational regions, followed closely by four-season usability,” said Soper. “There is no doubt the pandemic has had an impact on our lifestyle, but also our mindset. The more time Canadians spend in their homes, the more apparent their needs and priorities become.”

According to a Royal LePage survey of recreational property experts, eighty-seven per cent of respondents said that recreational regions in Ontario have seen inventory decrease compared to what is typical for their respective regions, including the highly-sought after cottage destination of Muskoka, north of Toronto.

“Muskoka, like many smaller communities within a reasonable drive from the GTA, was particularly impacted by the migration out of the GTA, and by buyers who accelerated their long-term plans to purchase a second property,” said John O’Rourke, broker, Royal LePage Lakes of Muskoka. “A scarcity of inventory added more fuel to the fire, creating competition in the market unlike anything we’ve seen before.”

“Land O’Lakes is not a region that typically experiences this kind of activity, but since the onset of the pandemic, supply cannot keep up with the increasing demand,” said Chris Winney, broker, Royal LePage ProAlliance Realty. “As no one has been able to travel for the last year, buyers of all ages and stages of life are looking for recreational properties that offer the flexibility, and internet quality, that will allow them to work remotely if they choose, but also have rental potential.”

Properties with four-season usability are particularly attractive to buyers in Ontario, and experts expect another brisk spring market.

According to the Royal LePage 2021 Demographic Survey released last month, 43 per cent of those aged 25 to 35 in the province of Ontario say the pandemic has increased their desire to move to a less dense area, and 68 per cent say it is important to work for an employer that allows them to work remotely.